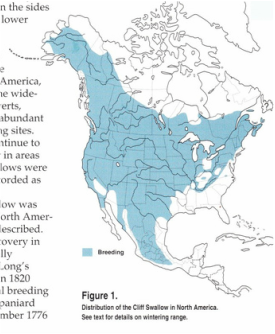 Cliff Swallows migrate from the breeding range to the winter range via Mexico, the Central American isthmus, and n. South America, staying east of the Andes. Apparent migrants are also recorded rarely in Bahama I., Cuba, the Lesser Antilles, and Virgin I. (Am. Ornithol. Union 1998, Feldmann et al. 1999). It is not known whether any intraseasonal movement occurs on the wintering range, although the species probably is nomadic at that time. Most migrants presumably follow the Central American isthmus between North and South America. Migration in both directions seems leisurely and spans several months; there are fewer observations of spring than of fall migrants.

Birds begin leaving the wintering range in early February, although some individuals are still present in April (Hudson 1920). Thousands were observed migrating through Panama on 24 February 1994, passing continuously for at least 1 h in a narrow front about 0.4 km wide at a rate of about 150 birds/min (E. Morton pers. comm.). Some birds pass through Colombia and Panama as late as early May (Ridgely 1976, Hilty and Brown 1986, Paynter 1995). Migrants are seen in Sinaloa, Mexico, as early as 14 February and commonly in Oaxaca by mid-March, with migration in Mexico lasting until at least 30 May (Phillips 1986).

Birds first arrive in s. California in early February (rarely in late June; Small 1994), Arizona usually in early March (rarely as early as 9 February; Phillips 1986), Texas in early March (rarely 24 February; Oberholser 1974), Arkansas in late March (Tumlison 2009), Kansas in mid-April (rarely 26 March; Thompson et al. 2011), Nebraska in mid-April (usually 16–18 April but an extreme date of 22 March; CRB, MBB, Sharpe et al. 2001), Illinois in early April (rarely 29 March; Graber et al. 1972), Minnesota in late April (rarely 13 April; Roberts 1936), Idaho in early April (Burleigh 1972), Massachusetts in mid-April (rarely 9 March; Veit and Petersen 1993), the Yukon in late April (earliest 20 April; Sinclair et al. 2003), and Alaska in mid-May (rarely 7 May; Gabrielson and Lincoln 1959). For other first arrival dates, see Bent (1942). The peak period of migration in the Texas panhandle is 28 April to 18 May, with the earliest record being 9 April and the latest 2 June (C. D. Littlefield pers. comm.). More northerly populations generally arrive later than more southerly ones; however, P. p. melanogaster typically arrives on its se. Arizona breeding range (at the time of the summer monsoon) 6–8 wk later than P. p. tachina and P. p. pyrrhonota in n. Arizona (Phillips et al. 1964). The first birds to arrive in a breeding area usually do so in groups (Shaw 1991, CRB, MBB), possibly reflecting associations of birds that have been together since the previous summer. Arrival date is subject to selection: unusual cold weather in spring in Nebraska that caused the deaths of large numbers of birds (Brown and Brown 1998a) resulted in later arrivals and colony initiation dates in years following the mortality (Brown and Brown 2000b).

Begins when nestlings fledge and as colony sites are vacated, so departure can be staggered within a locale and quite variable between years. In sw. Nebraska, birds begin departing in early July in some years; most are gone by early August, although some late nesters may not leave until late August (CRB, MBB). Peak of migration in U.S. apparently is in August and early September when flocks of thousands may be seen moving south (e.g., Bent 1942). In the Texas panhandle, the peak of migrant passage was 24 July to 30 August, with extreme dates of 18 June and 3 October (C. D. Littlefield pers. comm.). Migrants recorded in Mexico from 24 July (Veracruz) to 5 November (also Veracruz); in Costa Rica from 29 July to 30 November (Phillips 1986); in Panama from 29 July to late October (Ridgley 1976); in Colombia from early September to mid-October, with the largest numbers in mid-September (Hilty and Brown 1986; Bayly et al. 2014); in Venezuela from early August to October (Meyer de Schauensee and Phelps 1978); in Bolivia from early October to early December, with the bulk of birds 23 November to 5 December (Parker and Rowlett 1984); and in Paraguay 15 October to 5 December (Lowen et al. 1997, J. Unger pers. comm.), with an extreme date of 2 September (Hayes 1995). Hundreds of thousands of Cliff Swallows pass through Mucubaji Pass in the Merida Andes, nw. Venezuela, from late August to early November, with peak passage in mid October (estimated 150 birds/min; C. Rengifo pers. comm.). Some birds are in Argentina, presumably on the winter range, by October (Pereyra 1938) and continue to arrive through December. Migration dates divided by subspecies are given in Phillips (1986).

Usually seen in groups of up to several hundred, occasionally several thousand, birds. Probably exclusively diurnal migrants, foraging as they move. Cool and rainy weather forces spring migrants in Nebraska to concentrate over lakes, ponds, and rivers where they may spend several days foraging low over the water surface. These concentrations can sometimes exceed 5,000 birds in a 1- to 2-km stretch of lake or river (CRB, MBB). Often seen in flocks with other swallows. Sleeps in marsh vegetation during migration (Kirby 1978).